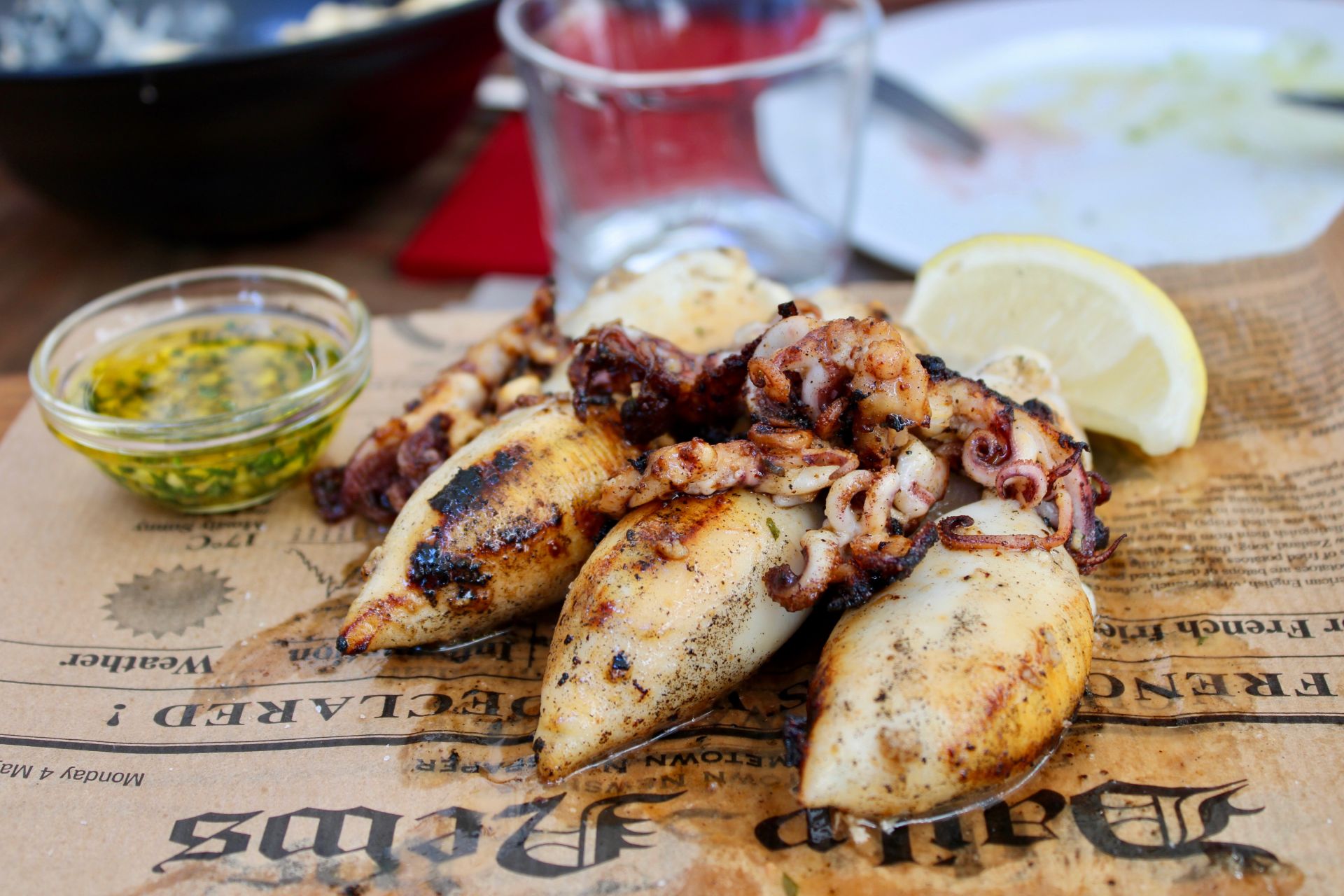 Ad - the food tour mentioned was gifted by LjubljanaNjam in return for mention in a blog post, but all views are my own.

On my seventeen day trip through the Balkans, I was more excited about visiting Ljubljana thank any other city on my itinerary. Despite this, I ended up with just one full day there! We made a last minute decision to explore more of Slovenia, so sacrificed some of the time we were planning to spend in Ljubljana visiting Kamnik and Velika Planina, and one night glamping on a vineyard in Maribor.

This meant that I had to spend my 24 hours (and bit!) in Ljubljana wisely, which meant getting through a lot of food and wine in a short space of time! Here’s what I got up to, hopefully inspiring you to visit Ljubljana and offering some ideas of how to spend 24 hours in Ljubljana if you like food and wine.

24 Hours in Ljubljana: An Introduction

Ljubljana is the capital of Slovenia, and the largest city in the country. It’s not huge though – it’s one of the smallest European capitals with a population of just 293,000. It’s pretty, it’s trendy, it’s foodie and it’s fun.

It has a gorgeous green park (Tivoli park), a spectacular castle overlooking the city, and a shimmering green river (the Ljubljanica) running through its heart, lined with cafés and restaurants. If feels friendly and safe, even at night, and it’s also rather peaceful as the centre is pedestrianised.

There’s loads to see in the city, and you’ll notice that my guide doesn’t include many of the main attractions. This is because I didn’t want to spend my 24 hours in Ljubljana rushing around ticking boxes, but rather I wanted to savour the city through it’s food and drink offerings and, above all, just relax.

We arrived in Ljubljana on a Friday evening, so quickly freshened up before heading straight out for our first foodie activity of our 24 hours in Ljubljana: Odprta Kuhna, or Open Kitchen. This street food market runs every Friday evening from mid-march through to the end of October in Pogačarjev Square, and brings together an impressive 60 eateries from around Ljubljana and Slovenia.

You can get traditional dishes, fine dining dishes, food inspired by world-wide cuisines and plenty of Slovenia wine, beer and cocktails. I tried my first (and not last!) glass of orange wine, ate some delicious dumplings and enjoyed a ‘granny’s lunch’ from Zimbabwe.

As well as the food, I loved that the Open Kitchen donates all leftover food to charity at the end of the event and that it’s committed to caring for the environment. All vendors are encouraged to use reusable or biodegradable packaging, waste is recycled and visitors are also encouraged to recycle.

24 Hours in Ljubljana: A Food Tour With LjubljanaNjam

What’s the best way to experience as much local cuisine as possible when you have just 24 hours in Ljubljana? Take a food tour of course! My friend Helene (if you like castles, traditional food and Slovenia you need to take a look at her gorgeous blog Wandering Helene!) had recommended LjubljanaNjam (or LjubljanaYum) and they certainly didn’t fail to deliver on their aim to help us “eat well, learn about local culture, and meet fellow foodies”.

They say that “good people + good food = good mood” and I couldn’t agree more! What I really loved about this food tour was the variety of places that we went to. There was a mixture of traditional cuisine, modern eateries and market traders. We learnt about the history of food in the region, but also about what, where and how the locals eat today. We visited small, independent, family run establishments, and there was wine too!

There was so much food, all of it fantastic – I didn’t actually try anything that I didn’t like. I won’t tell you the places that we visited as that should be a surprise, but I will spill the štruklji on some of the best dishes we tried (in my opinion). Speaking of štruklji, these traditional dumplings were one of my favourite things that we tried. I’d already tried sweet štruklji filled with cottage cheese when visiting Velika planina, but it was great to taste the savoury version as well, filled with minced meat.

There was also one particular restaurant we visited to taste some Istrian cuisine, and try some Istrian wine. We had a stunning Istrian pasta dish with creamy truffles, homemade gnocchi with Istrian pesto and, the highlight for me, calamari stuffed with cottage cheese, prosciutto and herbs. All of manners went out of the window here, as I had no shame in taking the last bit of all three of these dishes!

I must also mention gelato. Helene, who had recommended the food tour, had told me that gelato was a big deal in Ljubljana and she wasn’t wrong. She had recommended a few gelato places to me, and I was delighted to turn up at one on the food tour! There were endless flavours to choose from including some unusual, yet traditional, ones. I opted for my favourite, rum & raisin, along with chocolate orange and it made me very, very happy.

A huge bonus of booking a food tour with LjubljanaNjam, unfortunately one that we didn’t have enough time to make the most of, was that they also provide a foodie e-guide full of recommendations for the best places to eat and drink! It felt like they really went the extra mile to ensure that my entire trip was full of great food, wine and fun.

Our food tour ended around 3pm, meaning that we still had plenty of time to explore more of Ljubljana. With the castle watching over us from above the city, and as a big fan of a funicular, it was impossible to resist visiting the 11th century castle complex. We of course took the funicular, as I love how the views get better and better as you ascend to your destination.

If you don’t fancy the funicular you take the “Urban” tourist train from the City Hall, which takes you via a whole host of popular sights on your way to the castle. There are also several walking routes up to Ljubljana Castle.

Ljubljana Castle feels like a whole other world from Ljubljana and you could easily spend a lot of time up there, as there’s loads to do! I’d definitely recommend climbing the viewing tower – you do have to pay extra but it’s so worth the stunning panoramic views over the city.

I also loved looking into the old prison cells (and looking at the menu of food that the prisoners would have eaten), and if we’d had more time I would have joined the immersive ‘Behind Bars’ guided tour.

If you’re spending more than just 24 hours in Ljubljana you can also join the ‘Time Machine‘ guided tour where you’ll learn about the history of the castle from costumed actors, visit the ‘Virtual Castle’ to watch a twelve minute projection about the castle, see the Permanent Exhibition of Slovenian History, visit the Museum of Puppetry or even have a go at the ‘Escape Castle’ escape room style game.

However, if you’re here because you love food and wine I have some really great news. Not only is there a wine bar at the castle, but there’s also a small castle vineyard with 1050 vines, including an offspring of the oldest grapevine in the world, which grows in the castle courtyard.

The wine bar and shop, Strelec, only recently opened and serves exclusively Slovenian wines from all three wine-growing regions of Slovenia. There’s also a restaurant downstairs which intertwines Slovenia wine with traditional food, but we’d just come from the food tour so we didn’t pay a visit on this occasion.

We headed in to the wine bar for a tasting, and planted ourselves on a couple of stools before trying a variety of red, white and sparkling wines. Having decided we’d tried enough wine (for now), we paid up and were about to head back down to the city when we heard someone ask how to get to the terrace bar.

Of course we followed, and found the most perfect wine drinking, sunset watching spot I’ve ever seen. There was no way we passing by this beautiful place, so we ordered a bottle of Malvasia and admired the view over Ljubljana as the sun went down.

24 Hours in Ljubljana Means a Little More Food and Wine

The sun had set so we took the funicular back down to the main city, feeling ready for some food and maybe one more teeny glass of wine. After a quick detour to H&M to buy me scarf as it was getting pretty chilly, we headed to Ala Pršuterija for a meat board overlooking the river. It was absolutely mouthwatering delectable, and we were almost tempted to order a second!

Instead, we continued our journey to a small plate restaurant, as we wanted to visit as many places as possible during our 24 hours in Ljubljana. TaBar was a bit pricer than what we’d been used to over the last couple of weeks, but the food was excellent and they had the longest list of orange wines in the city. We couldn’t decide what to get so opted to let the chef choose for us but I couldn’t tell you what we ended up with.

From here we tried one more wine bar that had been recommended, Movia Vinska Klet, before heading slightly out of the centre to find some craft beer. I was very happy to stay on the wine (or go to bed!) but it was only fair to let the boyfriend enjoy some local beer.

We eventually found Pivnica Lajbah and discovered that they’d been hosting a beer festival during the day. This meant that we had some difficulty actually buying a beer as they’d only been accepting tokens that day, and had sold out of said tokens, but we got there in the end!

And so our 24 hours in Ljubljana was complete, and we headed back to our apartment for a good night’s sleep before our early bus to Venice the next morning.

For more posts from my trip from Istanbul to Venice via the Balkans (including Ljubljana), take a look at these: