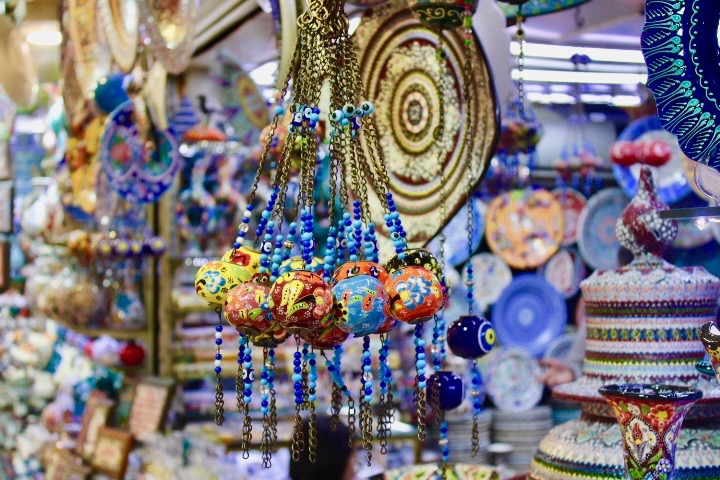 I was childishly excited to visit Istanbul – to explore the Grand Bazaar and other endless markets, cruise up the Bosporus river taking in the sights of both Europe and Asia, experience the Blue Mosque and the Hagia Sophia and eat five kebabs a day. But as I read more about all that Istanbul had to offer, I started feeling stressed about how I would see everything I wanted to when I had less than 48 hours to do it in.

I decided not only to prioritise, but to spend my time immersing myself in the culture of Istanbul and local life rather than spending precious hours queuing for the must-see items. I’m not for a second saying that the likes of the Blue Mosque and the Basilica Cistern aren’t part of Istanbul’s culture, of course they are, and at some point I will return to Istanbul and visit these sites, but when you only have 48 hours joining long queues doesn’t make much sense.

If you’re planning a trip to Istanbul and only have 48 hours, my first piece of advice would be that you need more than 48 hours! I’d have loved to spend at least a week there but, you know, we have jobs and lives that don’t always give us this option! So here’s how I spent (less than) 48 hours in Istanbul.

Billy and I arrived in Istanbul late in the evening, meaning that we went straight to find our apartment (via a kebab shop, obviously) and fell asleep. As a result, we awoke the next morning like kids (or adults) on Christmas day excited to start exploring Istanbul and headed out nice and early.

If you’ve read my blog before you’ll know that food is a huge part of my travel, and I feel like I haven’t experienced a destination unless I’ve eaten my fair share of the local cuisine. Food is a big deal in Istanbul and a huge part of the culture, and with so much to try and so little time a food tour seemed the best way to try as much as possible whilst learning about the history of culinary Istanbul.

Our tour was with Istanbul on Food and was incredibly comprehensive, lasting around 6 hours and including multiple tastings at 10 different stops. It took us around much of the city including both the European and Asian side, which meant that as well as eating lots of great food, we also saw a lot of Istanbul and got our bearings before exploring on our own. The timings (9am – 3pm) were perfect as they meant that we still had loads of the day left to enjoy more of Istanbul. I’ve written a whole blog post on the tour and which foods you should try in Istanbul which you can read here.

I’d read about the Princes’ Islands but didn’t think we would have time to visit them during our 48 hour stay in Istanbul. However, our food tour finished at the Kadıköy ferry port and our guide suggested that we visit so we took her advice and hopped on a boat.

The Princes’ Islands, known as Kızıl Adalar (Red Islands) or simply Adalar (Islands) in Turkish, consist of 9 islands of varying sizes. All of them are almost completely free of motor vehicles, with transportation by horse and cart. I wasn’t sure how well the horses were treated (they looked rather skinny and over worked but that might have just been me being over cautious) so avoided doing this and explored on foot instead.

The most popular islands to visit are Heybeliada, Büyükada, Burgazada and Kınalıada. I’d have loved to have seen them all, but with limited time we opted for Heybeliada on the advice of our food tour guide as it’s the greenest of the islands. To get there, take the ferry from Kadıköy and get off at the 3rd stop. If you have the time why not do some island hopping and see all four? I actually enjoyed the ferry ride itself just as much as the island… the sun was shining, the views back over Istanbul were breathtaking and we got to see a little bit of each island from the water.

Once on Heybeliada we went for a stroll in no particular direction and found ourselves heading into a peaceful pine forest. We were entering an official park so did have to pay to enter (7 Lira if I remember correctly which is equivalent to about £1) but it was worth it. A few moments later we found a small restaurant with a stunning ocean view so stopped off for a beer and some mezze. By accident, we had found the PERFECT sunset spot and spent the next hour or so watching the sun go down before continuing our walk through the forest. And the highlight? A women walking her giant bunny rabbit through the forest which was too cute!

Beer and Hookah in Karaköy

Our accommodation was in Beyoğlu (I’d definitely recommend staying there, it’s close enough to everything you’d want to see but not touristy at all), so we got the ferry back from Heybeliada to Eminönü and walked across the Galata Bridge in roughly the direction of our apartment. Our route took us through Karaköy, a ‘trendy’ neighbourhood with a grid of narrow cobbled streets lined with hookah bars and cafes.

Despite it being a Monday evening, live music drew us towards one particular bar which offered everything we wanted: comfortable outdoor seating under a ceiling of brightly coloured umbrellas, funky (weird) wall decorations, great beer, great hookah (no silly flavours) and a tipsy family of four enthusiastically singing along to the live music. We spent a few hours here relaxing and I’d definitely recommend this bar if you’re in Karaköy, it’s called Levanten and it’s hard to miss!

I wasn’t expecting such a large, serene park in the middle of busy Istanbul! Full of vibrant flowers, oak and walnut trees hundreds of years old, pretty fountains and a LOT of bins this park is the perfect haven. Although it’s the oldest park in Istanbul, for centuries it served as the outer garden of the Ottoman imperial palace, Topkapı Palace, and was opened to the public in 1912. The park serves as a perfect cut through from Eminönü to Sultanahmet so if you’re heading to the Hagia Sophia, Blue Mosque and Basilica Cistern definitely take this route.

Despite being the most popular area of Istanbul with tourists, we didn’t spend very long here. I won’t deny it was beautiful – a large square with impressive fountains sat in front of the stunning Blue Mosque and was quite breathtaking – but it did feel over commercialised. My benchmark was corn on the cob which was priced at 7 Lira here compared with 4 Lira everywhere else. I know that difference is pennies, but still! Due to our time restriction, we didn’t join the massive queues to visit the inside of the Hagia Sophia or the Blue Mosque but instead admired them from the outside before moving on.

The Grand Bazaar and Other Markets

The Grand Bazaar, and the markets in general, were my favourite bit of Istanbul and the one thing I knew I couldn’t miss. The Grand Bazaar is the largest covered market in the world at 30,700 square meters with over 60 streets and 4,000 shops. It’s also one of the oldest in the world, with the original core dating back to 1461. Over the years it’s expanded greatly, with amenities for traders including restaurants, a hamman, a mosque and prayer rooms. It’s now got pretty much everything you could need including a police station, a post office, banks and a tourist information centre.

We walked from Sultanahmet through countless outdoor markets before passing through a metal detector into the Grand Bazaar. I was almost blinded by the bright gold jewellery that lined the shop windows at the entrance we took! We wandered through sections selling jewellery, leather, fur, spices, sweets and sunglasses (yep, I couldn’t resist a bit of haggling and got them down by 60%). We stopped to refuel on a hearty lamb stew (I talk all about this in my ’30 foods to eat in Istanbul’ post here) before eventually finding our way out.

From here we continued our market adventure wandering through the fish market (hunting for fish sandwiches) and the spice market (all the smells and colours) and searching out breads, cheeses, meats and mezze for the picnic we’d be having later that day on the sleeper train from Istanbul to Sofia. I’ve never seen so many people crammed onto such narrow streets, but it didn’t feel intimidating or unsafe – it was just people going about their daily lives and shopping for their families.

I’d heard that the neighbourhood of Balat shouldn’t be missed, so we hopped on the 99 bus from Eminönü and ten minutes later we were in the traditionally Jewish and Greek Orthodox area of Istanbul. The colourful streets that Balat is known for certainly didn’t disappoint – they were truly beautiful! We wandered through quiet streets taking pictures and stopping at cafes to take a break from the steep slopes before discovering yet another impressive market. This one was just one street but seemed to go on for miles with the most colourful and gigantic vegetables I’ve ever seen.

One thing that I hadn’t been told about Balat is that although it gets a lot of tourism (the colourful houses make it very instagrammable), there did seem to be poverty that I hadn’t noticed in other areas of Istanbul. There were a lot of children begging for money around the markets, sometimes not wearing shoes. However, when we were walking through the more residential areas of Balat we saw families playing out on the street who looked happy and content, which was lovely to see.

As we were catching the train the Sofia that evening, Balat concluded our 48 hours in Istanbul and we caught the bus back to Eminönü and headed to our apartment to collect our bags before heading to the train station. We managed to pack a lot into two days, but there’s so much more to see and I’d love to be able to spend longer in Istanbul at some point in the future.

I hope this post has inspired you to visit Istanbul even if you don’t have loads of time, or given you some tips on what to do if you’re planning a trip! I’d love to hear any advice from those of you that have been to Istanbul so drop me a comment below.

P.S. if you enjoyed this post please share it on social media using the icons right at the end or pin it by hovering over the below graphic. Thanks!