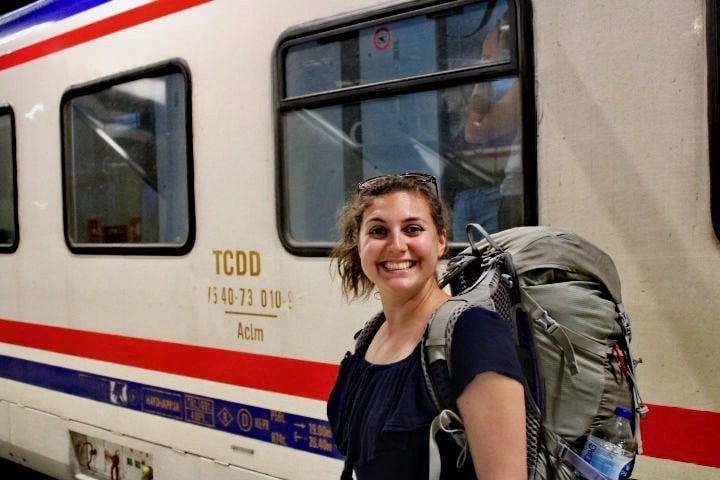 My feelings about travelling from Istanbul to Sofia on the night train were mixed. I’d never been on a sleeper train before so it certainly had the novelty factor, but wouldn’t it be much like sleeping in hostel dorm, but worse? I expected cramped rooms, dirty beds, snoring train companions, horrible toilet facilities and absolutely zero sleep.

In fact, I loved my experience on the night train from Istanbul to Sofia and I’d happily take the journey again. Read on and I’ll explain the basics such as when it runs, how long it takes and how much it costs before telling you what to expect and why you should definitely consider taking it in the future.

The Istanbul to Sofia night train runs daily from Halkali station just outside of Istanbul at 9.40pm from 1 June until 7 October 2019 or at 10:40pm the rest of the year. There are a few ways to get to Halkali, but the easiest by far is to get the shuttle bus from Istanbul station at 8.30pm which is included in your train ticket.

The bus takes around 40 minutes, and it will then take you around 5 minutes to walk from the bus into the station and find your train – luckily everyone else on the bus will be doing the same thing so you can just follow the crowd!

The Istanbul to Sofia night train takes around 10/11 hours, so you should arrive in at Sofia train station at 8.38am, although ours took about an hour longer. Speaking to someone on the shuttle bus who had done the journey around 30 times, I learnt that sometimes it can be a couple of hours late and sometimes a couple of hours early so that’s something to bear in mind when booking an onwards journey.

Tickets for the Istanbul to Sofia night train can be bought at Istanbul station (we wanted to buy them online beforehand but weren’t able to do this). You can either buy them on the day or in advance, so we bought them the day before just to be safe.

The tickets themselves cost £16.45 (you’ll be charged in Lira and this is the equivalent in GBP at time of writing) each and then you can choose whether to reserve a couchette in a two-bed compartment for an additional £13 or a four-berth compartment for £8.90.

As we were travelling as a couple and I really value my sleep, we splashed out on a two-bed compartment. If you were travelling solo I think it could be fun to reserve a four bed and make friends with your travel companions, plus it’s cheaper! If you’re travelling alone and want to splash out, you can reserve a one-bed sleeper by buying a first class ticket for around £25 and paying £31 for the sleeper reservation.

Snacks. The most important thing you need to know is that there is no shop/cafe on the train and there isn’t anything at Halkali station so make sure you buy your snacks before leaving Istanbul. Imagine a 10/11/12 hour train journey without snacks! Actually, please don’t, it’s not worth the pain.

What to Expect on the Istanbul to Sofia Night Train

The Istanbul to Sofia night train was much nicer than I expected it to be and I had a great time! My love of bunk beds helped. As I stayed in a two-bed compartment, this post will focus on that. However, from the research I’ve done, the four-berth is just as clean and comfortable but there is less space as you don’t get a table or luggage rack.

First impressions of the Istanbul to Sofia night train

We boarded the train and found our compartment immediately as it was the first one we got to! My first thoughts were “perfect, I won’t have to walk far to the toilet”. As we opened the door to our little home for the night we were greeted by a lot more space than I expected. There were two very wide and comfortable seats, a sink, an extendable table and a luggage rack.

Under the table there was a mini fridge containing two small bottles of water and two packets of biscuits, which I thought was a lovely touch! There was one plug socket but no WIFI or USB ports (just an FYI, I wasn’t expecting that).

A quick test of the seats and I gave them my approval before unpacking our very comprehensive picnic onto the table and placing our rucksacks nicely out of the way on the luggage racks above. As the train set off (perfectly on time) we spent the next couple of hours picking at our picnic and watching Netflix… perfection!

Sleeping arrangements on the Istanbul to Sofia night train

To turn your living room/diner into a bedroom, the backs of the seats fold down to create one bed and above that the other bed pulls down from the wall. There’s a ladder to help you onto the top bunk too. On each bed you’ll find a pillow and a (rather scratchy) blanket, but fear not. In plastic wrapping you have clean sheets and a pillowcase, and they really were clean!

The bed was fairly comfortable. Obviously not hotel comfortable, but definitely good enough and I didn’t have any back pain or discomfort the next morning. I took the top bunk (it’s my favourite, you’ll be well aware of this if you’ve ever read my mountain hut survival guide blog post!) and it was a little tricky getting up there but nice and cosy when I got there.

Border control on the Istanbul to Sofia night train

This was the big downside of the Istanbul to Sofia night train because if my sleep is interrupted I’m usually in a very bad mood for the foreseeable future. There seemed to be a lot of passport checking and I was in a bit of a sleepy daze so I will tell you as best as I can remember but please don’t take this to be 100% accurate.

Around 11pm there was an initial passport check which involved the guards coming to our compartment to check passports, that wasn’t a problem at all. Then around 2am we had to get out of bed and off the train to queue up at border control for the next passport check. It didn’t take as long as I expected (probably half an hour in total) and we were giddy enough about crossing the border for it not to bother us too much.

After this there seemed to be endless further checks, most of which I slept though. About half an hour after queuing up at border control, the train stopped again at the Bulgarian border and we had to hand over our passports again – luckily we were allowed to stay in bed!

I think we stayed here for a couple of hours, but I’m not sure how normal this is as I’d not heard anything about that prior to travelling. During this time customs came round to ask whether we had anything to declare, and then our passports were given back and finally we were on our way and not interrupted again.

Toilets on the Istanbul to Sofia night train

I’m including a section on the toilets on the Istanbul to Sofia night train because it was something that I was wondering about and didn’t really find an answer to. I know it’s not a big deal to everyone, but that pre-bed wee can be very important for a good night of sleep!

There were two toilets on our carriage at either end, which wasn’t bad at all because there were hardly any people there! Even if the carriage had been full it still would have been enough.

One of the toilets was a squat one, whilst the other was a western style sit down toilet. I only used the sit done one and, whilst it was pretty much like any train toilet, it was perfectly clean and had lots of space. No complaints at all!

How was sleeping on the Istanbul to Sofia night train?

Obviously my sleep was interrupted by passport checks, but I honestly think that otherwise I’d have slept through the night! The first half (pre-2am border check) I slept on the bottom bunk as my boyfriend, Billy, and I fell asleep in each other’s arms watching Netflix (aww) and it was so cosy that we stayed that way until the train stopped.

The second half (post-2am border check) I was alone on the top bunk and managed to sleep through the passport check, customs officers and our passports being returned. I didn’t even realise that we were at the second border for around two hours as I was fast asleep, that information came from Billy!

I did briefly wake up from being too hot when we weren’t moving, and then too cold when we were moving as I’d opened the window and the cold air was blowing straight onto the top bunk. Other than that, I woke up refreshed about an hour before arrival when the guard knocked on our door to tell us that we would soon be in Sofia.

Tips for Enjoying the Istanbul to Sofia Night Train

There are a few really small things that will turn your experience of the Istanbul to Sofia night train from simply a way to get from A to B to an enjoyable experience in itself. Here’s my advice:

In Summary, Why Should You Take the Istanbul to Sofia Night Train?

Aside from the fact that it’s something a little different if you’re used to travelling between countries by plane and staying in hotels/Air BnBs, there are loads of reasons to give the Istanbul to Sofia night train (or any night train) a go.

I hope this has been useful, but if you have any questions you can comment below or get in touch on Instagram. Here are some other posts that might also be when planning your trip, as well as some multi-trip travel inspiration!