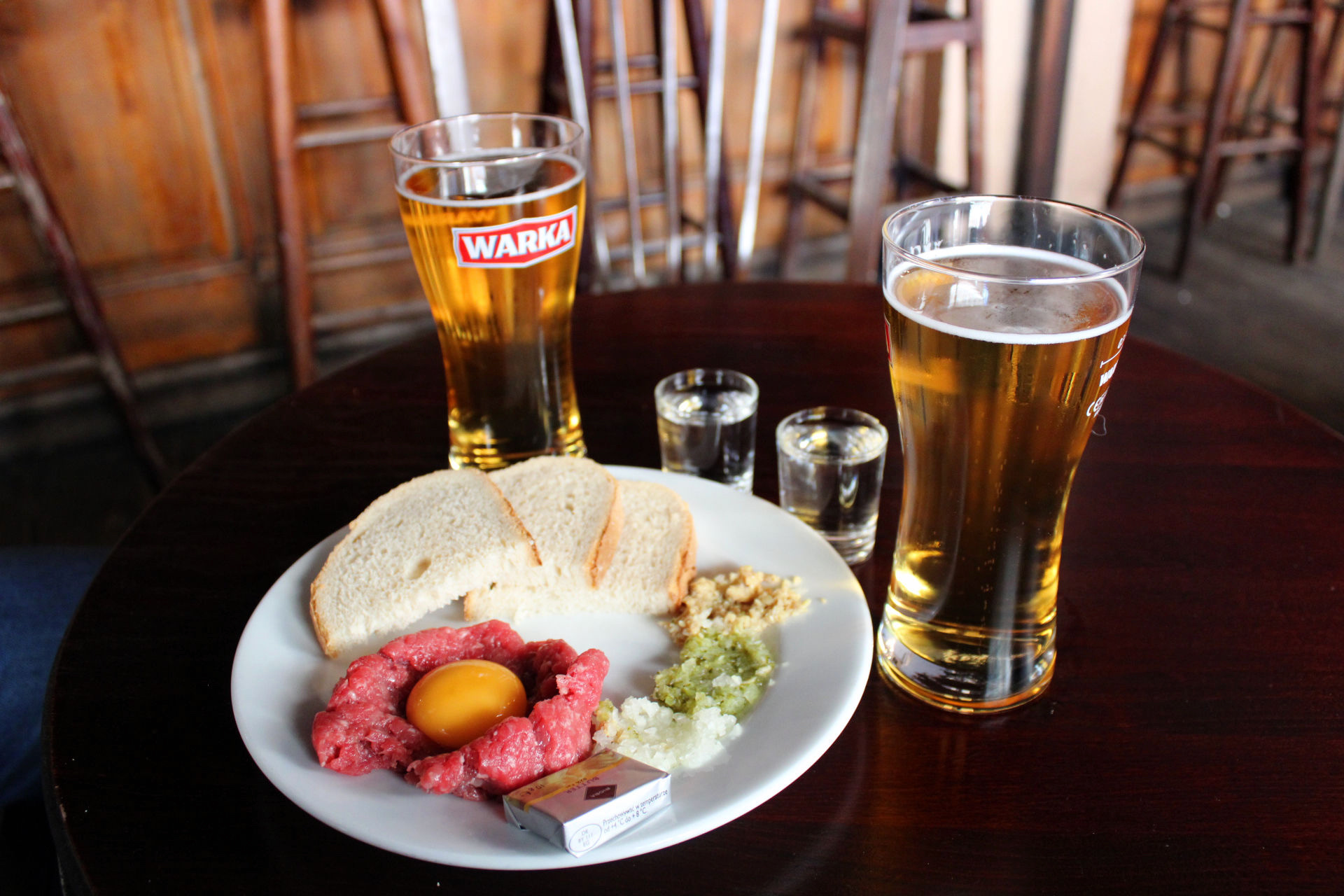 This post contains affiliate links, which means that if you purchase through one of these links I may get a small commission at no cost to you. These links are marked with an *.

I’m getting a little obsessed with Poland! This may have only been my fourth trip, but I’m falling more in love with the country every time I visit and I can’t wait to return. The colourful rows of buildings, the cute Old Town centres, the friendly locals, the hearty comfort food and the cheap drinks make Poland, and a lot of Eastern Europe, the perfect destination in my eyes. My most recent trip took me to beautiful Wroclaw, where I spent the weekend non-stop eating and drinking. Based on my experience, here are the best restaurants in Wroclaw – mostly focused on the best pierogi!

Just before I dive in, I thought I’d pop in a few of links that might be interesting to you if you’re looking for other places in Eastern Europe to visit too!

I’ll jump straight in with my favourite bar/ restaurant that I visited in Wroclaw, Przedwojenna. Despite a determination to try as many restaurants as possible, I still managed to patron this place twice in two days.

Przedwojenna is open 24 hours a day and has a very simple menu consisting of just nine dishes including Kielbaska (Polish sausage), Gzik (a dip of cottage cheese, yoghurt and milk served with potato), Sledzik (salted herring) and their speciality, beef tartare. Their drinks menu is just as minimal, simply listing beer, wine, vodka, coffee and juice, all at zł 5 each (approx £1).

On our first visit we shared a beef tartare (we had one each plus Gzik on our second visit), which was served with a raw egg, bread and pickles. Not only was it some of the best beef tartare I’ve ever had, but the dish, two vodkas and two beers came to a grand total of zł 29, which is less than £6! The venue itself was cosy, rustic, inviting and perfect for people watching.

During my weekend in Wroclaw, I ate a LOT of pierogi. As a result, the next three recommendations are based on the best pierogi I had in Wroclaw. Baked pierogi seemed to be popular in Wroclaw, which I hadn’t seen before – they’re tasty but personally I prefer the traditional boiled ones.

Anyway, I discovered Pierogarnia Stary Młyn on my last day just before heading to the airport. Of course my final meal had to be pierogi! This Wroclaw restaurant is right in the centre of the old town so easy to find, and it’s huge so you shouldn’t have too much of an issue getting a table. As it’s dedicated to pierogi, there’s an extensive menu to choose from, and you can have most of the options as boiled or baked. A warning that the baked pierogi are massive, so you won’t need many.

We ordered some bread and lard to start (one of my favourite Polish traditions), then a selection of meaty pierogi followed by some sweet pierogi for dessert. The white chocolate and raspberry pierogi, served with a sweet cream sauce, come with a high recommendation from me!

Gluten Appetit was a lucky find when exploring Wroclaw on e-scooters. It’s surprising how much of an appetite you build up whizzing around on those things! They specialise mainly in dumplings, made using high quality ingredients and apparently the best flour, from the Lower Silesian mill. I would probably describe this place as offering a modern twist on Polish classics.

We shared a plate of Pierogi Ruski as a snack and they were some of the best dumplings I ate all weekend. The interior of the restaurant was gorgeous and definitely what drew me in to the place, with plenty of light, modern decor, plants in every direction and lovely touches everywhere. The only downside was that I fancied a glass of wine and they didn’t seem to serve alcohol.

I thought that Gluten Appetit was home to my favourite pierogi in Wroclaw, until I visited Konspira. Although I had a few beers in me at this point, I can still confirm that the pierogi here were excellent! The restaurant is named Konspira as a tribute to the post-war resistance during the period of the Polish People’s Resistance. At this time, hundreds of thousands of conspirators worked day and night in private flats writing, printing and distributing illegal contents.

It’s not overly themed, as the focus remains on producing great food using high quality ingredients, but there were some really, really cool lamps made out of gas masks and few other relics in there. We ordered a pierogi platter, with a mixture of boiled and baked dumplings, and they were utterly delicious. Do not miss this place on your hunt for pierogi and the best restaurants in Wroclaw!

This might not have been the best food I had in Wroclaw (the pierogi were a little cold), but if you want to eat with the locals in the setting of an impressive market hall, and spend approximate £1.60 on a massive plate of dumplings then this is a good bet. I enjoyed my experience here, but I’ve heard from travel blogger Man Vs Globe that the milk bar next door (immediately to your right as you enter the market) is very good so you may want to try there as well.

Lepione came to our rescue when we were hungover and craving a mighty, savoury, random breakfast. It’s a pay-by-weight, canteen style of restaurant where you load up your (very large) plate with whatever food you want, including so many different kinds of dumplings, and then pay at the till. The hangover resulted in us going a little overboard, especially considering that this was breakfast for us, but it was still super cheap and the food tasted great!

Whilst we’re on the subject of breakfast, let’s talk cafés. You might be surprised to learn that the first thing I ate in Wroclaw wasn’t a pierogi, but rather a pastry! Up early after arriving late the previous evening, and slowly wandering from our Air BnB towards the old town, we stumbled across Familijna and spotted some delightful looking pastries in the window. Stepping inside, the sight and smell of freshly baked bread, cakes and pastries meant that we couldn’t resist!

I had a pastry bigger than my face (I don’t think the below picture does it justice), topped with a thick layer of Nutella. It was mind-blowing in sweetness and I didn’t think I’d be able to eat more than half of it, but a few moments later and it had gone! Excellent coffee, window seats for people watching and easy to find.

I have to admit that I didn’t have the chance to visit these final two restaurants on the list, but I had to include them because they’ve come so highly recommended to me by others!

Bistro ODA is a fine dining restaurant, and one that we had planned on going to on the Saturday evening but had to cancel due to being full of pierogi and having consumed slightly too much Polish wine. The reviews online are incredible, with many saying it’s by far the best restaurant in Wroclaw and several saying it’s in their top restaurants they’ve ever visited! It’s got a 5/5 on TripAdvisor and 4.9/5 on Facebook, which is pretty good going. A six course tasting menu will set you back zł 130, which is about £26.

Before I left for Wroclaw I asked Twitter for restaurant recommendations and by far the most popular response was Iggy Pizza. Again I planned on visiting, but I was in a whirlwind of pierogi and missed it off my list – I will be returning though! Hello Freckles, Man vs Globe and Kirsty Leanne all recommend this spot for the best pizza in Wroclaw, so it’s worth checking out!

Things to do, Where to Stay & Where to Drink in Wroclaw

I’ll be publishing blog posts on things to do in Wroclaw and the best bars in Wroclaw over the next couple of weeks, so keep an eye out for those. You can follow me on Instagram, Twitter or Facebook for updates, or subscribe to emails.

In the mean time, if you’re looking for places to stay I can highly recommend the Air BnB that we stayed in. It was gorgeous, with plenty of light, exposed brickwork, high ceilings and a modern kitchen and bathroom. The location was fantastic too, with the centre of the Old Town less than a ten minute walk away (or less than 5 minutes on an e-scooter, not advisable after drinking all day!). Oh and it wasn’t expensive either!

If you haven’t used Air BnB before, sign up using *this link and save £34 on your booking.

If you’d prefer to stay in a hotel, I’ve done some research for you and would recommend the following*:

Hopefully this post has given you some inspiration, and now you know the best restaurants to visit in Wroclaw!