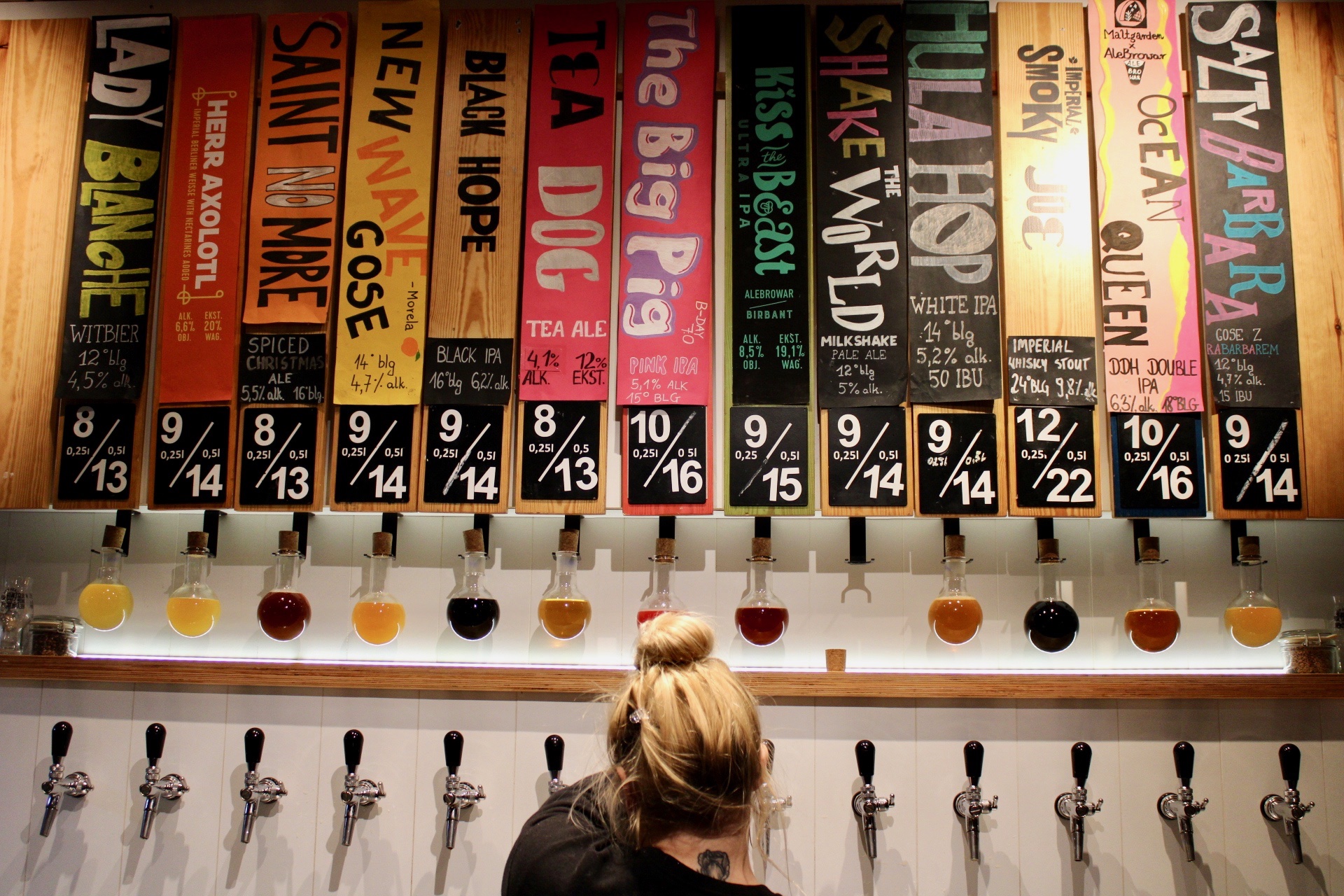 Wroclaw is a fantastic destination for explorers, foodies and those fancying a relaxed, boozy weekend in Poland. I recently spent a couple of days there, exploring the city on foot, eating many, many pierogi and drinking far more than was sensible for riding e-scooters afterwards! Although my boyfriend and I will both happily drink beer and wine (as well as a few G&Ts and Aperol Spritz’s), my preference is wine and his is beer. As a result, we ‘researched’ several wine and craft beer bars over the weekend. Here are my tops picks for the best bars in Wroclaw for wine and craft beer.

If you’re looking for the best restaurants or places to eat in Wroclaw, I’ve written about that too!

I love a wine bar, they make me feel grown up (I’m 28 years old, I should be feeling grown up by now regardless). When looking for wine bars, my criteria is that they should serve local wines (or as local as possible if I’m in a country that isn’t big on wine-growing), be independently owned, have a cosy and intimate atmosphere, and serve some sort of tasty snack offering. Here are the best wine bars that I found in Wroclaw.

I may as well start with my favourite! If you only visit one wine bar in Wroclaw, let it be Winnica. We were on day two of our weekend and I’d not had any Polish wine yet, so we were stood Googling ‘bars in Wroclaw that serve Polish wine’ and not having much success. We gave up, put our phones away and instantly spotted a little sign pointing towards Winnica wine bar and realised that sometimes looking around can be more reliable than the internet!

Winnica is reached via a small courtyard and, as soon as we stepped inside, I knew that this place was exactly what I wanted. Immediately in front of us was a small wooden bar, a wall of wine bottles and four small tables. There were several local wines to choose from, so we went for a bottle of white wine and got comfortable. This wine bar certainly delivered on the cosy and intimate atmosphere that I craved, and offered a rustic, family-owned feel.

Not only was the wine delectable (making it very hard to resist ordering a second bottle), but we also spotted a cheese board on the menu. Generous chunks of local cheese perfectly complimented the wine, and we were in heaven! The prices were reasonable as well considering that it’s hard to find local wine in Poland – the bottle cost around zł 80 which is about £16.

After our wine and cheese at Winnica, we went for a wander and found ourselves in yet another pretty courtyard, which happened to lead to another wine bar! Zbawacy Win wasn’t quite as cosy and rustic as Winnica, but it was beautifully decorated, full of comfortable seating and had the most incredible selection of wine!

They stocked wine from all over the world, including an extended range of the local wine we’d just enjoyed at Winnica. It was more expensive in Zbawcy Win, with the same bottle of wine costing zł 130 here, equivalent to around £26. Still very reasonable when compared to the UK, but out of principle we decided to order by the glass.

Although more expensive, I would still recommend Zbawcy Win based on the size of their wine collection alone! I spotted a Slovenian orange Malvasia that had been my favourite wine when visiting Ljubljana a few months before, so I went for that and enjoyed it very, very much.

Just a few steps away from Zbawcy Win was Cocofli, where we sunk into the most comfortable sofa to enjoy yet more wine. I wasn’t sure if I’d ever be able to get up from those squishy cushions! What I loved about Cocofli was that it was full of locals, some enjoying wine, others enjoying coffee and cake. The walls were lined with bookshelves, and everything felt so relaxed.

The menu listed several Israeli wines, so we gave that a go and experienced the smoothest red wine I’ve ever tasted. We also had a rather strange snack of pitta bread with pesto, tapenade and curry sauce… a strange combination but we ate it nonetheless.

I didn’t have a beer here, but I had what they called a Bitter Spritz. I thought it was going to be a bitter shandy but I was pleasantly surprised to find that it was their version of an Aperol Spritz… but better!

There was an interesting selection of beer including some very strong ones! These are the kind of beers that would cost you £8 for a pint at home in the UK, but Eastern European prices still applied and the boyfriend was very happy. The atmosphere was buzzing, but it was still a relaxed venue full of locals catching up over a beer or two.

Fancy a steak with your beer? This craft beer bar specialises, of course, in craft beer, of which they have 12 taps to choose from, but are also hugely proud of their steak, which they grill at 850 degrees celsius. Plus, they have a tartare menu, my favourite! The main space has a buzzing atmosphere and views of the town hall, whilst their basement level hall offers a quieter space.

When renovating this basement area, they actually discovered a tunnel where barrels of beer were transported from their current location to the Piwnica Swidnicka restaurants across the road, which is the second-oldest restaurant in Europe.

I’ll be honest with you, I was already quite tipsy when I visit Spiż, so my memory could be lacking in accuracy slightly! Spiż is a brewery and restaurant situated on the main square in Wroclaw’s Old Town, in the basement of the town hall. It’s a huge area, with copper beer vats and delicious unfiltered beer, brewed according to the original recipe from 1992 when the brewery opened.

There are six types of beer produced in Spiż, and each beer is served with brown bread topped with lard – one of my favourite Polish snacks!

The ‘Best of the Rest’ Bars in Wroclaw

The only time that I listen to jazz is on holiday! For some reason, we crave jazz as soon as we step into a foreign country. We were in luck when we stumbled upon Vertigo one evening after dinner – a proper jazz club! Round tables surround the stage, and a classy bar sits at the back serving expensive, but delicious, cocktails. The music, whilst all jazz, was varied and actually really good!

Pijana Wiśnia wasn’t necessarily one of my favourite bars in Wroclaw, but I’m including it because it’s rather unique and therefore worth a visit. Pijana Wiśnia translates to Drunk Cherry because they serve serve cherry liqueur, made from cherries and cognac! It’s actually a chain in Lviv, Ukraine, very popular amongst Polish tourists in particular.

There’s not much seating in there (we grabbed the window seat and looked out over the town hall), but customers stand around tall, circular tables inside and outside of the bar. You can have your cherry liqueur hot or cold, and as someone who really doesn’t like cherry or liqueur, I’ll admit it was pretty nice!

Aside from Winnica, the wine bar that I started with in this blog post, Przedwojenna was my favourite bar in Wroclaw! The drink menu was rather limited – the options were simply wine, beer, vodka, coffee or juice. Similarly the food menu consisted of just a few items.

But this place was perfectly rustic, offered some of the best beef tartare I’ve ever tasted, along with a few other classic Polish dishes. Even better, it was super cheap! A beef tartare, two vodkas and two beers came to less than £6. In our weekend in Wroclaw we visited Przedwojenna twice, and had beef tartare on both occasions!