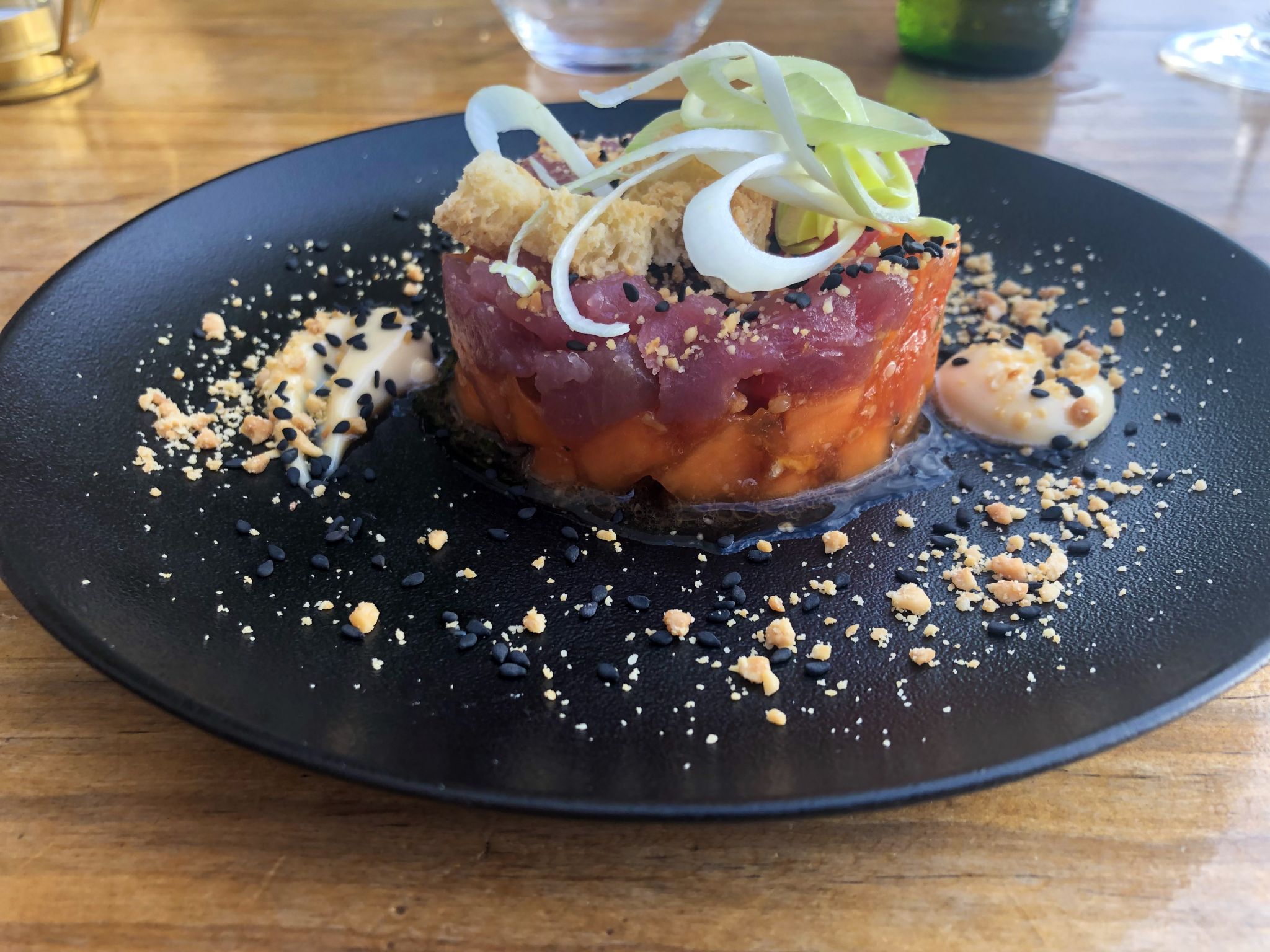 I’ve been lucky enough to spend the last week in Gran Canaria with my wonderful boyfriend Billy and his family doing nothing at all, and it’s been wonderful. Most evenings were spent relaxing in our villa with food lovingly cooked by Billy’s dad on the bbq, from spatchcock chicken to steaks the size of my shoulder… all prepared to utter perfection. This meant that when we did eat out, it not only had to provide an insight into local cuisine but also live up to the standard of food we’d been eating in the villa.

Thank goodness we walked past Taste Meson on a walk along the seafront in our nearest town! Overlooking the bay in the centre of Arguineguin, Taste Meson is a small plate restaurant designed to showcase local produce. It’s more of a fine dining style of eating than the tapas style that you might expect from a small plate restaurant in this part of the world, but the atmosphere is definitely holiday dining rather than anything fancy.

We were seated outside with an uninterrupted sea view, perfect for watching the sun set, and presented first with the drinks menu. With over 300 wines served by the glass it was a little overwhelming so I started with a glass of Cava (because when in Spain…) and everyone else had a beer.

The food menu was then explained to us: page one consisted of small plates with a recommendation that four plates would equate to a main course, whilst the second page consisted of slightly larger plates and a recommendation that two plates would suffice. You could of course mix and match between both pages and, if you were feeling brave or simply indecisive, you could order the chef’s recommendation. In this case, the chef would chose four plates for you from the menu and throw in a dessert. Whether you chose your own dishes or fancied the surprise, everything came with a wine and beer recommendation too.

I decided to choose my own plates, and my first course was a Doroda ceviche beautifully presented with papaya, cucumber, spring onion, guacamole (with an avocado allergy I opted for mine without this to avoid spending the last night of my holiday dead) and a chilli and coriander dressing. Every flavour on the plate perfectly complimented the others and if I had to describe the dish in one word it would most definitely be ‘fresh’. I hadn’t finished my glass of Cava (don’t worry, there’s nothing wrong with me, I was being polite) so I didn’t have the paired wine option. To be honest I don’t think I’d have taken a break from the food to even think about a sip of wine!

Sticking with the fish theme because you have to when you’re by the sea (right?), my second course consisted of asian tuna tartare. This was again served with papaya but this time with sesame, asian vinaigrette and a soy mayonnaise (soy sauce and mayonnaise are my favourite sauces so I couldn’t have asked for a better combination). The fish was melt in the mouth and the sharpness of the asian dressing against the sweetness of the papaya was heavenly. The dry white wine recommended with the dish absolutely completed it!

Needing some vegetables in my life, I opted for roasted beetroot with goats cheese and truffle cream, browned butter and roasted almonds for my third course. Honestly the food kept getting better and better and this was no exception to the rule, with the sweetest beetroot and eye watering goats cheese to really get the taste buds dancing.

My fourth course was really special. It genuinely played with my emotions and I’m pretty sure I shed a tear because my tastebuds were going so ridiculously crazy. It was a simple belly of pork but it was cooked to complete and utter perfection and I promise I wasn’t the only one at the table having a ‘moment’ over it. With succulent meat, gooey fat and crispy on top, the pork was served with a cauliflower puree, a parmesan crisp and pata negra broth. The whole thing dissolved on the tongue and sent shivers to places it shouldn’t.

Just before the fourth course we decided to opt for a bottle of wine rather than individual glasses because we’re not made of money. I didn’t really notice the wine during the pork belly experience because my senses were otherwise occupied, but when I did I realised that it was utterly delicious. It was a young Pinot Noir from Bourgogne and it just disappeared right into my belly quicker than I could blink. With such rich food, it was the perfect light accompaniment!

So, on to dessert. I didn’t even hesitate when it came to ordering this course… the second I saw the menu I knew that the white chocolate and raspberry cream with all manner of chocolatey friends (browned white chocolate, chocolate syrup, chocolate crisp) was destined to be eaten by me. From the moment the dessert was placed in front of me until a good couple of minutes after I’d finished it, I didn’t speak a word (a big deal considering the amount of wine that had been consumed!). My mouth flooded with saliva and my eyes closed with culinary pleasure.

Although my belly was full and my taste buds were beyond satisfied, I couldn’t resist stealing a little bit of cheese from Billy’s cheese board dessert… why is it not acceptable to order dessert AND cheese? There were a couple of local goats cheeses, one of which was smoked so I didn’t try (fun fact: Smoked cheese is the one cheese that I don’t like) and one of which was absolutely heavenly! All served with a homemade marmalade but a worrying lack of crackers.

Compared to everything else we ate in Gran Canaria, Taste Meson was a little on the pricey side. However, given the incredible quality of the food, the excellent service and the sunset view we had it was 100% worth it. If we were in the UK we would have paid double for the same thing! It’s also worth noting that if you book in a lower season (June is low season as it’s not school holidays) you can save 30% on all food by booking online through TheFork.

P.S. If you’d like to read more restaurant reviews why not check out Man Behind the Curtain, My New Favourite Restaurant: Blue Sakura, The Restaurant You Have to Visit in Budapest, and Where to Eat in Vilnius and Trakai.