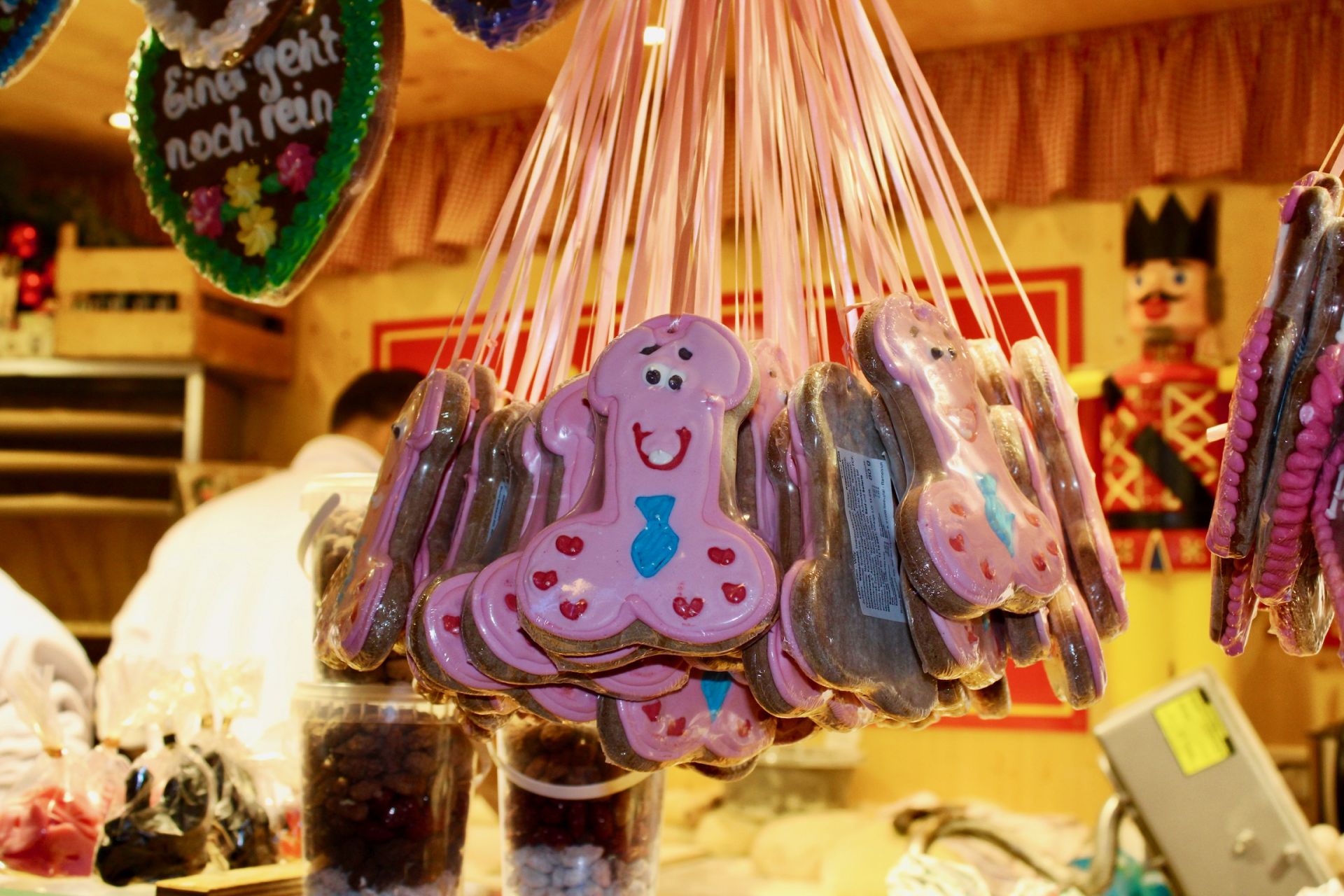 Ad - this trip was supported by Hamburg who offered a hotel stay, entrance to attractions and some much appreciated mulled wine vouchers!

Hamburg’s Santa Pauli Christmas market ran from 18th November to 23rd December 2019 from 4pm until 11pm Monday-Wednesday, 4pm until midnight Thursdays, 1pm until 1am Friday-Saturday and 1pm until 11pm on Sundays. I’d imagine that this year the times will be similar, but I’ll update this blog post closer to the time.

The Santa Pauli Christmas market is situated on Spielbudenplatz on the Reeperbahn, and it’s pretty easy to find thanks to it’s bright lights! And if you’re travelling with family, don’t worry – although the strip tent (which we’ll come on to) is adults only, children are welcome at the rest of Hamburg’s Santa Pauli Christmas market. There’s even a Sunday children’s programme!

Oh and there are toilets at Santa Pauli, something which I was worried about! The toilets are nice and clean, but they will cost you 50 cents a go.

There’s one stand selling all manner of vibrators and, my favourite part of Santa Pauli, the willy tree. This is a beautiful purple and silver tree featuring lots of shiny tinsel and lights, plus willies in all shapes, sizes and colours on the trunk for added decoration.

The other stands are less kinky, although there are a few saucy Christmas tree decorations around – I wanted a Christmas willy for my tree but was very disappointed in their availability! There are some fantastic signs above the stalls such as a naughty snowman and a pig carving a pierced member to entertain you too.

Mum and I very much enjoyed the male strip show which was absolutely hilarious, complete with props and audience participation. Although, we were rather disappointed that a) the stripper wasn’t dressed as Santa, and b) the show ended just before we saw “it”.

How Does Santa Pauli Compare to Hamburg’s Other Christmas Markets?

Unlike Hamburg’s other Christmas markets were you would take a break from walking around by drinking your mulled wine standing up, the Santa Pauli market had a winter deck complete with cosy seating areas, blankets, fire places and heaters. You could grab a mulled wine, an Aperol Spritz or whatever turns on your tastebuds and relax under the hanging Christmas trees whilst you take in the ‘buzzing’ atmosphere.

If you fancy yourself as a bit of a mulled wine connoisseur you can visit Santa’s Glühwein Apotheke and create your own prescription with a foundation of Riesling or Dornfelder wines from the Pflaz region. Flavours such as cinnamon, plum, orange and cloves are added with pipettes by your pharmacist, and shots of alcohol are served in test tubes.

The Santa Pauli Christmas market also offers live music every day (there is a programme at the entrance), and there there’s a great selection of food including spit-roasted pig (obviously), raclette, sausages and much more. Even more reason to stay around for longer!

Finally, the layout is a bit different to the other Christmas markets in Hamburg – in a good way! Rather than narrow walkways between a maze of stalls, everything at the Santa Pauli Christmas market is along two sides, with a wide walkway in the middle, and the winter deck at one end and live music stage at the other. This meant that even when it’s busy, it doesn’t feel quite as crowded as a lot of the other markets and you can actually move around!

If you don’t fancy eating at the Santa Pauli Christmas market, there’s a fantastic restaurant just across the road from it. It’s called Freudenhaus and it’s very German, with traditional food, huge portion sizes (if you haven’t had enough of those at the market!), friendly staff and an all-German wine list. Mum and I shared a beef tartare to start which was served with a range of accompaniments including egg yolk, sweet German mustard, anchovies and onion.

I then had roast duck featuring the softest meat and crispiest skin with perfectly cooked red cabbage and the fluffiest dumplings. It was absolutely delectable and I was extremely satisfied afterwards!

The man at the table next to us ordered a schnitzel and it was the biggest item of food I have ever seen… there was silence on our table and theirs when it arrived. If you’re after some wine, the Alte Reben Riesling is one of the best white wines I’ve had in a long time. You will need to reserve though – we were very lucky that we were able to walk in after just a half an hour wait but I’d recommend calling ahead.

For nearby drinking, you might like to go somewhere warm and a little quieter after the buzzing Santa Pauli Christmas market. We stumbled upon Café May whilst waiting for a table at Freudenhaus (it was directly opposite) – a comfortable and cosy café/bar selling coffee, cakes and delicious Aperol Spritz’s! It wasn’t too expensive either, but be aware that they don’t take card so you’ll need to have cash on you.

And that’s pretty much everything you need to know about Hamburg’s Santa Pauli kinky Christmas market! As always, if you have any questions please feel free to get in touch, or if you’ve been to the kinky Christmas market please do leave me a comment. And if you love a winter break, take a look at this blog posts for some more winter weekend inspiration: