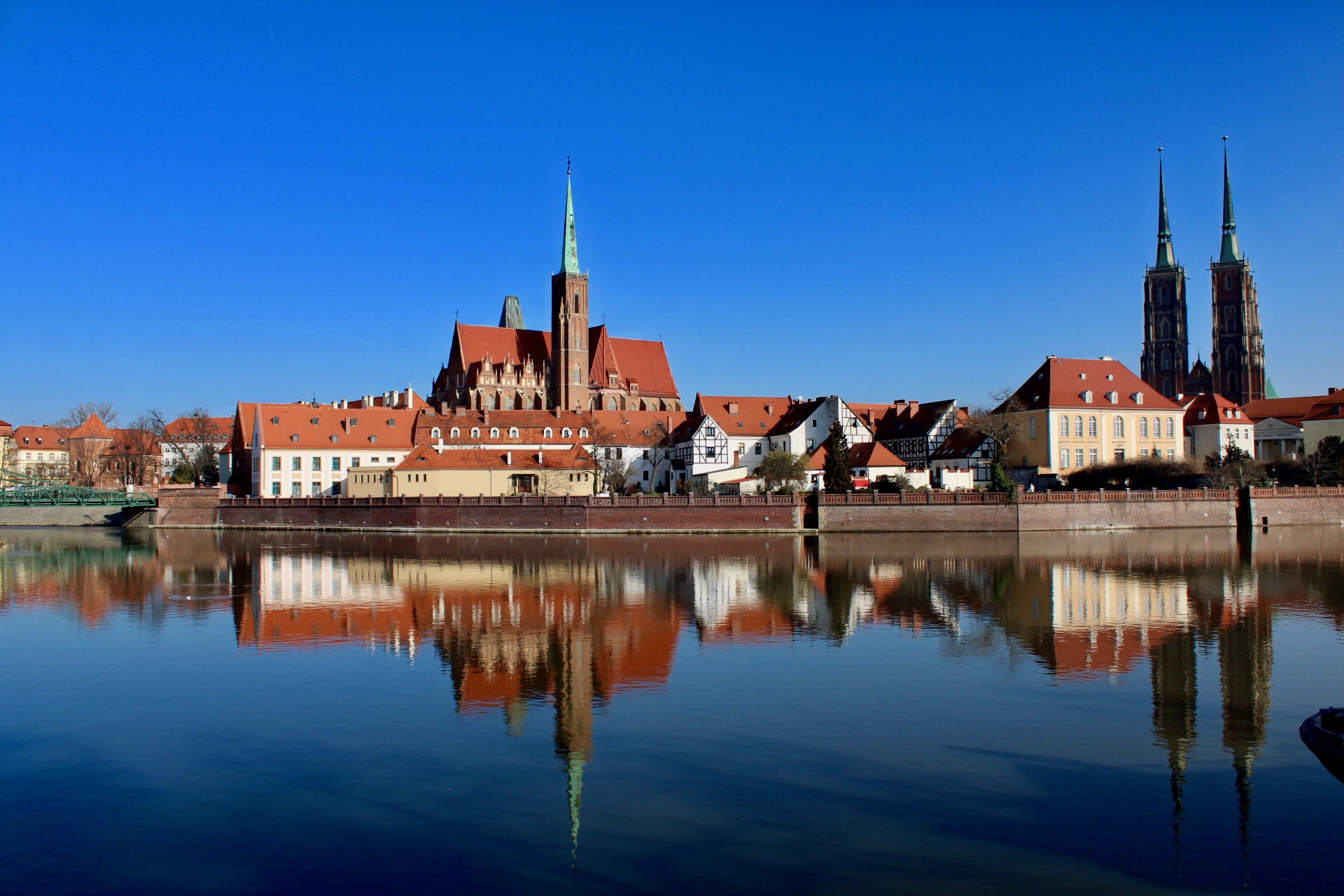 But also, Wroclaw is one of the most beautiful places that I’ve visited and the perfect place to visit for a weekend. You can explore on foot: wandering through the Old Town, island hopping (kind of) and stopping for plenty of pierogi. Most of my weekend in Wroclaw was spent eating, but I did have time for sightseeing too. Here are the best things to do in Wroclaw, and why it’s the city of dwarfs!

Before I get stuck in, you might be interested in a guide to the best restaurants in Wroclaw or the best bars in Wroclaw for wine and craft beer, so feel free to explore these links too.

I won’t keep you wondering – Wroclaw is home to hundreds of dwarf statues dotted around the city. It’s estimated there are over 400 of them, doing different activities: putting out fires, counting money, eating ice cream, working on laptops, abseiling from shop windows and photographing other dwarfs.

The Wroclaw dwarfs are a homage to the Orange Alternative, an anti-Soviet resistance movement who’s symbol was a dwarf. The group would protest the Soviet government’s censorship of free speech and public gatherings by painting gnomes on communist propaganda! In 2001, a statue of a dwarf was placed on Świdnicka Street, and in 2005 five smaller statues were placed around Wroclaw, including a fencing dwarf and a butcher dwarf.

You can purchase a map to help you on your dwarf hunting quest, and there’s also an app that you can download. However, the excitement of finding a dwarf by accident was very much real (even by the very end of the weekend), so we decided to just find them without assistance.

Ride Around on Electric Scooters

This might sound like a silly one to put so near the top of this blog post, but electric scooters are a fantastic – the best – way to see Wroclaw. They are all over the city and can be accessed using an app on your phone, and you don’t even have to return them to where you got them from! This means that you can ride your scooter from one point of interest to the next, stop for lunch and not have to worrying about someone stealing your scooter – as you’ll easily find another one.

In Wroclaw and in other cities such as Warsaw, Sofia and Hamburg, I’ve used Lime scooters, although there have been other brands in each of these places too. Lime seem to have the most scooters, and the app is so easy to use. Just download it, add your payment details and then scan the QR code on the scooter you’d like to borrow.

This is probably best enjoyed on foot so that you can really take in the beautiful market square and it’s buildings, including the spectacular town hall. And, of course, so that you can investigate the bars, restaurants and shops in the area.

The Market Square in Wroclaw is honestly the most beautiful I’ve been to, with it’s colourful buildings, stunning architecture and secret cut-throughs. Oh and it’s dwarfs!

Take in the Views from Penitent Bridge

The Penitent Bridge can be reached via St. Mary Magdalene Church, running between the two towers of the church and offering beautiful views over the Wroclaw from 45 metres up. Apparently the bridge teems with ghost of young women who preferred to party with men rather than look after their homes and children.

The bridge is also known as the Witches’ Bridge, because it’s said to have been used to identify women who were witches. Those suspected of witchcraft would be forced to walk across the bridge – if they lost balance and fell to their deaths they were innocent, those who made it across were deemed witches and killed.

It is of course much safer now, with railings and renovations to bring it up to contemporary safety standards! Although there aren’t any dwarfs up there, there is a small statue of a witch perched on the edge of the bridge.

A short walk (or e-scooter ride) from the Market Square and Penitent Bridge is the island-that-is-no-longer-an-island of Ostrów Tumski. This is the oldest part of Wroclaw, and can be accessed via the Tusmki bridge. There used to be loads of padlocks on the bridge, as it was a tradition (like in many places now) for couples to put a padlock here and thrown the keys into the river Oder as a sign of their love. The bridge was undergoing renovation when I visited, and the padlocks had sadly been removed.

It’s an incredibly beautiful place to walk around, with the most amazing architecture. We managed to time our visit to Ostrów Tumski perfectly to witness the lamplighter. The 103 street lamps here are gas-lit, and are lit every evening, 365 days a year, by the lamplighter, who wear a cloak and a top hat. Under his coat he discreetly hides a butane cartridge, and carries a long pole with which he ignites the lamp each evening and extinguishes them each morning. Wrocław is one of only two cities in Europe with this tradition, along with Brest in Belarus.

Climb the Tower of the Cathedral of St John the Baptist

Ostrów Tumski translated to Cathedral Island, so of course there’s a massive cathedral in the middle! Arguably the most iconic is the Cathedral of St John Baptist, which was the very first brick building to be built in Poland in 1244. My favourite fact is that it’s home to the largest organ in Poland, which was at one point also the largest in the world.

The Cathedral is breathtaking, and equally breathtaking in the view from the top of the tower. Make sure you check the opening times before you go, or, like me, you’ll end up having to go back three times because you got it wrong twice!

Wherever I am in the world (including at home in Leeds), I love to wander around a market. I love seeing the fresh produce and foodie offerings, and watching the mundane, every day transactions between locals and traders. The Wrocław Market Hall was completed in 1908 and consists of two floors (plus two cellars used for storage), with around 190 stalls in at the moment.

There was plenty of produce on offer, as well as several milk bars. We stopped at one of these hole-in-the-wall eateries for some pierogi, which were a little cold but that was made up for by getting to enjoy them in a corner of the market. We also found it pretty hilarious that on the upper floor of the market there was a sex toy vending machine!

Monument to the Anonymous Passer-by

This impressive monument was quite literally outside of our front door, so we didn’t have to make much of an effort to see it. Created by artist Jerzy Kalina and originally standing in Warsaw, it was moved to Wrocław in 2005. In Polish the monument is called ‘Przejście’, translating to passage or transition, but it’s more commonly known in English as the Monument to the Anonymous Passer-By.

The monument spreads across two sides of a main road and features the main character of a women along with her family, half of whom are falling into the ground on one side of the road and half of whom are climbing up on the other side.

The Monument to the Anonymous Passer-By represents the martial law of communist Poland, which was imposed in December 1981 and placed restrictive laws to quash the emerging anti-communism groups. The martial law drove people underground in fear, and the military would arrest people in the middle of the night, never to be seen again. Those climbing out of the ground on the other side are said to represent the lifting of the martial law in 1983.

Memorial to the Slaughtered Animals

Another memorial for you, that of the slaughtered animals. It looks fun (I even had my picture taken riding a goat before realising what it was really about), but it’s a nod to the fact that this narrow, cobbled street of Jatki was an abattoir before it came a cute row of galleries and shops – which are worth having a nosey in too.

The memorial consists of life-size, bronze statues of a goose, a goat, a rabbit, two pigs, a rooster and a calf. The latter two were added later, and a calf was chosen rather than a cow because a cow would have been too large for the site. Look out for the butcher gnome nearby too!

Go to the Zoo

I love going to the zoo on holiday, especially because it’s usually so much cheaper than in the UK! If you have some extra time, one of the things to do in Wrocłow could be to go to the zoo. It’s a way out of town, but accessible by e-scooter and gives you the opportunity for a longer scooter ride.

It was a little disappointing when we went because it was out of season and the weather was horrible (pouring with rain, after two days of brilliant sunshine) so most of the animals were nowhere to be seen. But in the summer it would be excellent, with elephants, lions, tigers and even bears!

These final three activities are things that I didn’t get to do in Wrocław for various reasons, but had really wanted to. We visited Centennial Hall to see the fountains, but failed to acknowledge that the fountains only run during the summer, and most of the hall was closed. Luckily it was right next to the zoo so our visit wasn’t wasted, and the building itself is remarkable even from the outside and without the fountains!

The Centennial Hall was formally known as ‘Hala Ludowa’ translating to ‘People’s Hall’ and was designed by Max Berg, and built between 1911 and 1913 to serve a a multifunctional space to hold exhibitions, concerts, sporting events and opera shows.

The multimedia fountain is the biggest fountain in Poland, and one of the biggest in Europe. There’s a show every hour, every day (during the correct season!), which uses 300 water jets to create geysers, mists and various shapes, synchronised with water and lights. Photos and films are projected onto the water during shows after dark too… I’m gutted I missed this!

The Panorama of the Battle of Racławice

This was on my list of things to do in Wrocław, but we didn’t have enough time unfortunately. Originally in Lvov, but moved to Wrocław after the Second World War, the Panorama of the Battle of Racławice is essentially a round building which is home to a huge painting (114m long and 15m high) of the Battle of Racławice in 1794, in which the Poles won over the Russians.

The painting is presented in a circular fashion, with guests standing in the centre of the round room. Special effects such as lighting and physical objects such as an artificial grass create a sense of reality. The history of the painting and the Battle of Racławice is told in 16 different languages and there’s an audio description available too.

Have you ever been to the opera? It’s on my bucket list, but I keep missing my chances! We planned to see the opera in Wrocław, but as we only had two evenings there we ran out of time. There are a few places to see opera shows in Wrocław, such as the Wroclaw Opera House, but I really wanted to see one of the ‘supershows’ at Centennial Hall. These have hundreds of performers, incredible stage sets and special effects – something I’ll definitely be making time for on my return to Wrocław!

I hope this has been useful, and as always please get in touch via comments or social media if you have any questions. If you’re looking for places to stay, you can click through to my ‘best places to eat in Wrocław‘ post and scroll right down to the bottom for recommendations and a nice £34 off of your Air BnB booking.