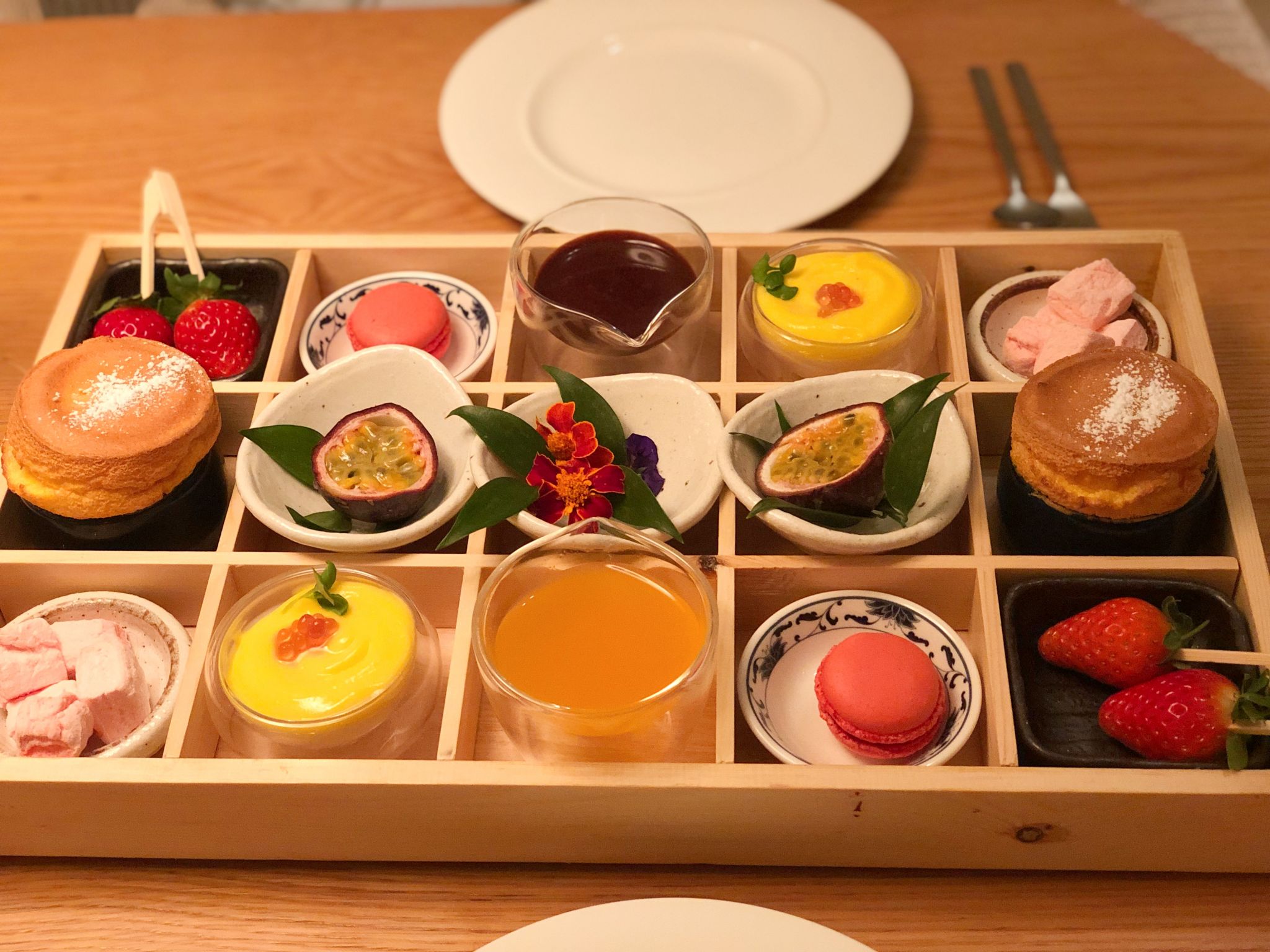 Despite Manchester only being an hour away from home, I’ve not spent much time there. So when I was whisked away for the weekend to see Jersey Boys at the Palace Theatre (which was great by the way, definitely recommend!) I took the opportunity to experience the city in the best way I know how… via my taste buds. Over the course of 24 hours, I ate my way around the street food stands, bakeries and restaurants of Manchester. Here’s what I discovered and ate.

It was no surprise that, despite a large breakfast at home, I arrived in Manchester hungry! Luckily, pretty much as soon as we arrived in Manchester we found the Piccadilly Street Food Market. With a lunch reservation in a couple of hours time, Billy and I agreed to share something as a little snack, but the second we smelt samosas we couldn’t resist having one each. The pastry was perfectly light and it was packed full of deliciously seasoned filling.

I love sushi, so when Australasia was recommended for lunch by a friend, I looked at the menu for approximately 1.27 seconds before deciding that it was absolutely the restaurant for me. I wanted to eat everything on the menu, from the sushi to the small plates to the steaks – to the extent that I was possibly more excited about lunch than I was about watching Jersey boys and spending the weekend with my wonderful boyfriend.

Arriving fifteen minutes early because I couldn’t wait any longer, we received a warm welcome and were shown straight to our table by a very friendly waitress. She explained how the menu worked, and offered us an iPad to make our wine choice (we went for an Australian dry Riesling which went perfectly with the sushi!).

Our first course was sushi: a mixed sushi and sashimi plate for two (because there were two of us, not because I’m greedy), soft shell crab tempura rolls and peking duck California rolls. All of it was delicious, but I would 100% recommend the mixed plate which was unbelievably fresh and tasty.

Next we had the mixed tempura and robata plate, which consisted of fillet steak skewers, chicken skewers with a peanut sauce (amazing), squid tempura and prawn tempura. Again it was all delicious, although we were still a little hungry afterwards.

The good thing about still being slightly peckish was that there was room for dessert! As it was Valentine’s weekend there was a dessert bento box special, so we went for that. I was a little reluctant as there weren’t many chocolate things in the box, and you know how I feel about that (if you don’t, I feel pretty strongly that desserts/cakes/biscuits etc. should always contain chocolate)! But actually it was great, and it turns out I may have been missing out by not previously trying things like passionfruit soufflé. Overall, I’m very glad I chose Australasia of the restaurants in Manchester.

After a large lunch we hadn’t planned on eating dinner, but after the theatre had finished we were, of course, peckish. Luckily, a family-run Italian Manchester restaurant called Giogio came to the rescue and welcomed us with warm arms despite it being late and us being a little tipsy.

Not wanting to eat hearty Italian main courses too close to bedtime, we opted for a sharing platter from the starters page. It was MASSIVE, I’m sure we would have had less food if we’d had a main course each, and we didn’t manage to finish it! But it was really tasty and everything on there tasted homemade. Think meatballs in tomato sauce, pate on toast, chicken wings, giant (and I mean GIANT) prawns, garlic bread… you get the picture.

The staff genuinely cared about us enjoying our food and having a good time, and nothing was too much of an ask for them. If you want to feel like you’re eating with a real Italian family give this Manchester restaurant a go.

You can’t visit the city without stopping off in one of Manchester’s China Town restaurants! Desperate to re-live my trip to Hong Kong, I demanded that we had dim sum for breakfast. Breakfast turned into a morning of stopping off at various bakeries and restaurants until we had satisfied our breakfast and lunch needs – let’s call it a dim sum crawl. Here are the highlights.

Ho’s Bakery was our first stop off, where we each had one and a half pork buns because they were three for £1 and I love a bargain. The bread was so sweet and the pork tantalisingly morish. I could definitely have eaten six.

We weren’t terribly adventurous here and actually had another pork bun, but at least that made it a fair test! We had a couple of different types, one of which had a very sweet and almost crunchy outer shell – different but delicious!

At this point we had decided that breakfast was over and it was now lunchtime, so sat down one of Manchester’s proper Chinese restaurants, Pearl City, for a vast selection of dim sum. Once Billy had gotten over his tantrum about the staff taking away our chopsticks and giving us a knife and fork*, we enjoyed some authentic Chinese dishes including chicken feet, rice rolls (we didn’t like these, too slimy), steamed scallop & prawn dumplings, spicy pork & nut dumplings and a whole host of other bits and bobs.

*FYI Billy asked for the chopsticks back which then resulted in us both having to stab slippery dim sum with said chopsticks to be able to pick it up.