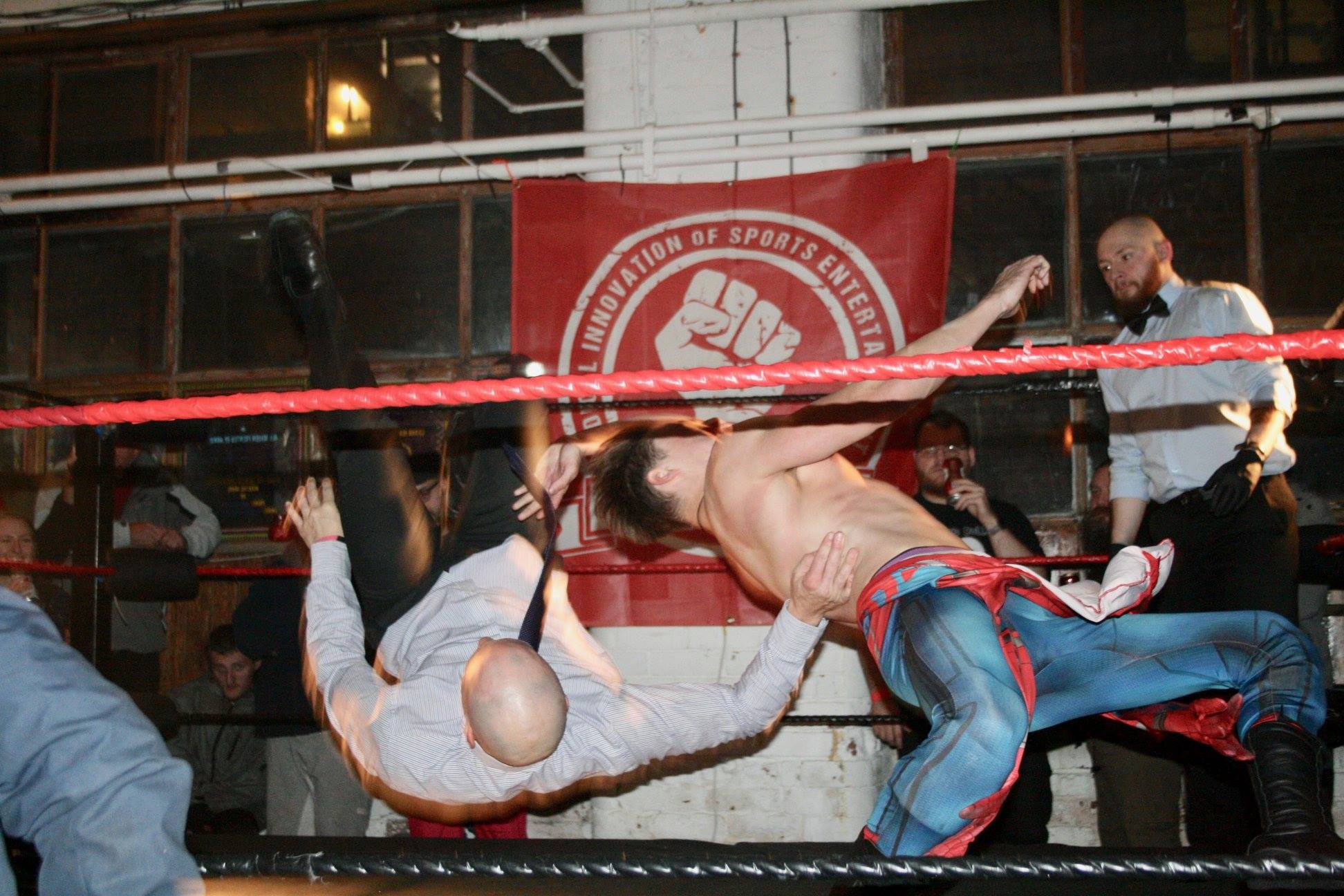 I’m a girlie girl and my nights out in Leeds usually consist of high heels, cocktails with the girls, a boogie in Viaduct and a 3am Big Mac, until my eyes were opened to a different type of evening out. My boyfriend, Billy, persuaded me to go to RISE: Underground Pro Wrestling with him, after he’d been to one of their events a few weeks before. I’d never watched wrestling before, nor did I have much of an interest in it, but I’m always up for trying something new so I agreed to give it a go.

All I knew about wrestling was that it’s choreographed (which I thought meant fake) and that men wearing lycra had to throw each other around a ring and pin their opponent to the floor for 3 seconds to win. It turns out there’s so much more to it, and it’s a really fun night out! Here’s my beginners guide to Rise: Underground Pro Wrestling for those who want a different night out in Leeds and are wondering what to expect.

What is RISE: Underground Pro Wrestling?

RISE: Underground Pro Wrestling is England’s maddest wrestling show, and it’s held at a variety of venues around Leeds. My RISE wrestling virginity was taken by, Spooky Slam 2, which was held at Temple of Boom which is just outside of the city centre near Mabgate. Previous events have been held at the likes of Brudenell Social Club and Sheaf Street. Each event consists of a series of matches, sometimes culminating in a DEATH MATCH. Sounds scary right?

What’s it Like to go to RISE: Underground Pro Wrestling?

Pretty much every aspect of RISE: Underground Pro Wrestling surprised me. Here are some revelations I had to give you an idea of what to expect:

Although I knew that wrestling was choreographed, I wasn’t aware that so much emphasis is put on the story around the matches. There are ‘loser leaves town’ deals, ongoing feuds and stories of love, loss and revenge.

Of course there was plenty of lycra as expected, but there was so much more! There were suit & tie matches in which the contestants were literally dressed in suits, shirts, ties and office shoes, and in one match team mates Boys II Men (I had no idea that there could be more than two people on the ring!) sported some incredible Mario and Luigi costumes.

Again, I had no idea that there would be props involved! Various objects made an appearance including deodorant (in the ladies match), Fruit Shoots, chairs and watermelons.

There was so much chanting, most commonly “HOLY SHIT” and the whole audience joined in, encouraged by the contestants and an extremely eccentric commentator. The matches often spilled out of the ring and into the audience, with fights literally happening at your feet, and I accidentally touched Spiderman’s penis when he rubbed up against me during his entrance dance.

The headline match, also know as the death match, was actually supposed to be in a barbed wire ring but this was shut down at the beginning of the night for being too dangerous (apparently there was a snitch, or so the chanting told me). Even so, it was so violent!! In this match the props included fluorescent tube lighting, drinks cans with the top sawn off to expose sharp metal and, terrifyingly, an actual hedge trimmer! There was broken glass and lots of blood, but somehow I found myself shouting along with everyone and really enjoying it.

RISE: Underground Pro Wrestling was a surreal experience, and not something that I thought I would enjoy. But for some reason, I was compelled to get tickets to the next event and have been a few times since! If you fancy spending an enjoyable evening drinking Red Stripe and shouting “HOLY SHIT” amongst other things, you can get your tickets here.

Maybe see you there! In the mean time, if you’re looking for other things to do in Leeds and Yorkshire have a read of my posts here.

P.S. if you enjoyed this post please share to your favourite social media channel using the icon below, or pin the below graphic by hovering over it. Thanks!