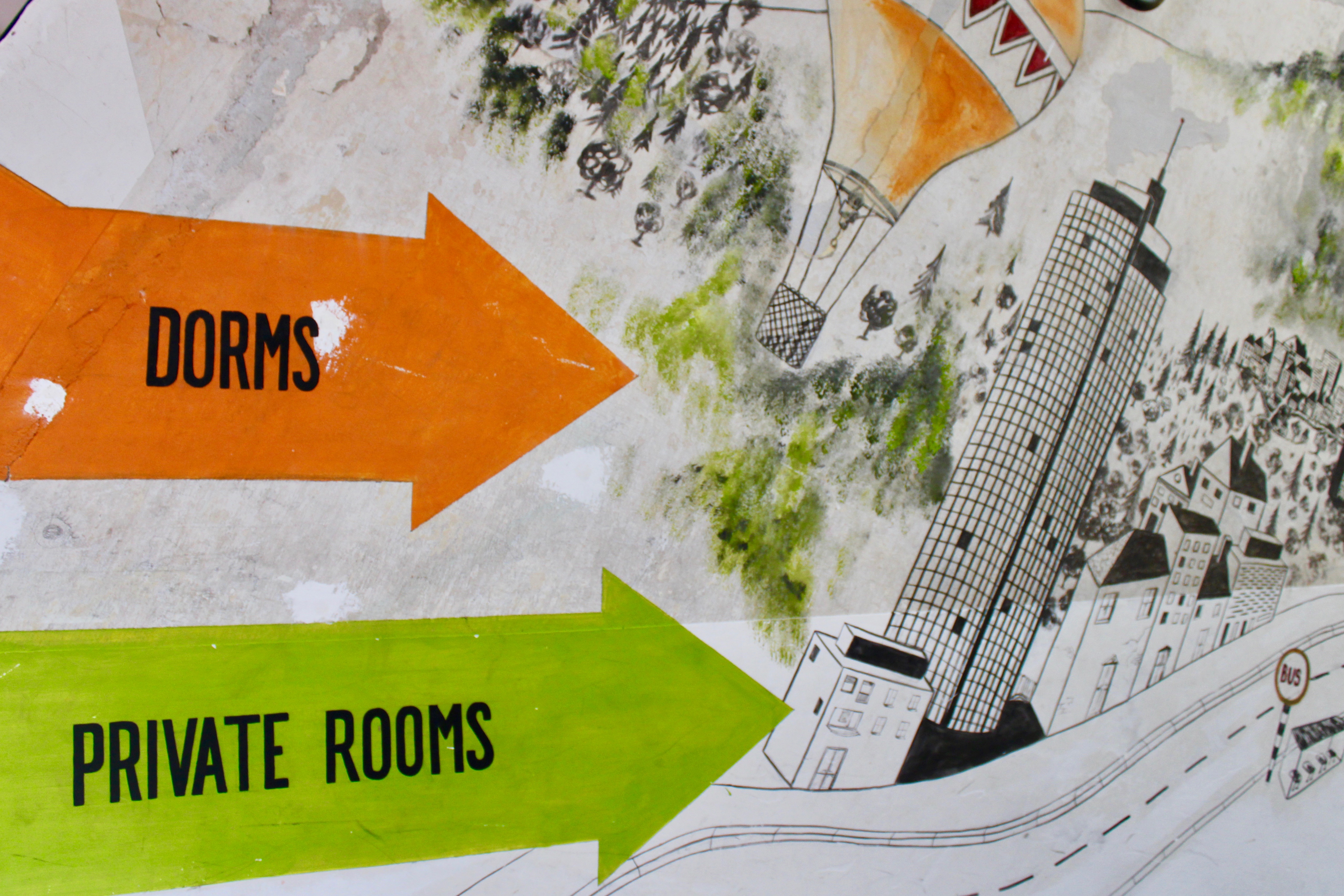 Gifted - I was gifted a three night stay at Swanky Mint in return for a blog post, but all views are my own. Affiliate links are marked with an * which means that if you make a purchase through one of these links I'll earn a small commission at no cost to you.

I don’t usually stay in hostels, it’s just not my travel style. I like my own space so I mostly stay in AirBnbs, with a few hotels thrown in to the mix as well. But recently, travelling through the Balkans with backpack in tow (again, not my usual travel style), I decided to give it a go. So, let me introduce you to Swanky Mint Hostel, Zagreb’s swankiest hostel, suitable for even those used to hotel standards.

I didn’t fancy staying in a dorm – this was a holiday and I was travelling with my boyfriend, Billy – but I could definitely see myself hanging out in a hostel bar in my sandals getting to know other travellers. So let me introduce you to

If I was going to lose my hostel virginity I couldn’t just stay at any old hostel. It needed to be carefully considered, otherwise I might be put off forever! Although I could definitely see myself hanging out in a hostel bar in my sandals, getting to know other travellers, a smelly dorm room was not going to sell the hostel experience to me! Here are some of the reasons that Swanky Mint Hostel in Zagreb was the perfect introductory hostel for me.

You can’t argue with awards! Swanky Mint Hostel is the most awarded hostel in Croatia with achievements such as Kayak Hostel of the Year 2019, Best Hostel in Croatia at the 2017 Hoscar Awards (Hostelworld), several Guest Review Awards by Booking.com and multiple Certificate of Excellence awards from Trip Advisor. It’s also received recognition from the likes of The Guardian, The Telegraphy, Time Out, Hostel Bookers and the Balkan Backpacker.

Swanky Mint Hostel is located in a beautiful, old building which used to be a dry cleaning and textile-dye factory back in the 19th century. It was owned by one of three brothers who left their hometown in the east of what is today Czech Republic, searching for work and adventure.

Vilim Ondrušek ended up in Zagreb and opened a dry-cleaners. He married another dry-cleaner called Ana Brejch and together they purchased the building that is now Swanky Mint Hostel, expanding their business into steam operated dying of clothes and textiles.

What I particularly love is that Swanky Mint Hostel pays homage to the building’s history not only by maintaining some of it’s original features but also giving its rooms names such as Plisir (referring to popular fabric in 20th century) and Šnajderaj (meaning tailor’s shop).

Even the room names that don’t refer directly to the history of the building still show respect to other popular trades in Zagreb at the time. For example there’s the Brijacnica (barbershop) room featuring a barbershop chair, the Urar (watchmaker) room featuring an antique clock, the Šuster (shoemaker) room, the Šesiri (hat) room and the Puceraj room which refers to the process of making buttons for military uniforms in the early 20th century.

The Swanky Mint Hostel Pool and a Bar

Need I say more? Seriously though, both of these areas are beautifully designed, well maintained and full of personality. We’ll start with the pool, which I didn’t use during my stay as I was too busy sightseeing, but I did go and have a nosey and liked what I saw! It looked spotlessly clean and highly inviting. A few sun loungers made it the perfect-chill out area, without it being able to get too busy or over-crowded. More Zagreb hotel than hostel!

The bar at Swanky Mint Hostel is the definition of cool, it even has a cool name (Swanky Monkey Garden). Even on a Monday evening it was buzzing, with guests and locals enjoying a cocktail on one of the funky terraces, either perched on a bar stool, sat at a table or relaxing on a beanbag (me!).

They have an ever-changing and award winning cocktail menu and the bar staff are trained rigorously to make sure that you only ever get the best drinks. Oh, you also get a welcome shot on arrival!

Two things to mention here. Firstly, breakfast! You can buy a pastry or a toastie if you want, but the show-stealer is the breakfast buffet. For 40 Kuna you can help yourself to as much breakfast as you want, which consists of toast, cereal, waffles, yoghurts, fruit, jam, pate, cheese, ham, Nutella… you get the picture.

There’s also a small restaurant serving up a small but perfectly formed menu of Asian food. I’d already eaten dinner but I had to do my due diligence and try the food, so ordered some chicken satay skewers. They were really, really tasty! The waiter even read my mind and brought over some extra satay sauce when he saw how much I was enjoying it – I was very impressed!

The Level of Service Is Insane

We arrived in Zagreb quite late, around 11.30pm on a Sunday, yet the girl on reception was still full of energy and enthusiastically welcomed us to Swanky Mint Hostel. All members of staff that we met were professional, friendly and keen to help, and when we had a bit of a mix up with the rooms (we were booked into a single rather than double room) they went above and beyond to remedy the issue.

It’s not just the staff that make the service here so great. They have their own travel agency, Swanky Travel, which offers a variety of walking tours around the city centre and excursions to locations outside of the city such as the Plitvice Lakes National Park.

You can also rent bikes and e-bikes from Swanky Mint Hostel, join in one of their regular events where you could be treated to live music, DJs, cocktail tasting or drinking games, or relax in the cosy living room with board games and a book exchange. You can even join in a short cocktail making workshop if you want!

What’s It Like to Stay at Swanky Mint Hostel?

As I’ve already mentioned, I didn’t fancy a dorm so stayed in a private room. Therefore I can’t comment on the dorms, but due a mix up with the rooms I did end up staying in three different private rooms. This certainly wasn’t a bad thing, as it means I got to experience different parts of the hostel!

The first two nights I stayed in the main part of the hostel, in a double room and then a single room. The rooms were fairly basic but well decorated, clean and the beds were comfortable. The rooms also seemed to be pretty sound proof meaning that if you want an early night you shouldn’t get disturbed by the party-goers!

The single room was really small, so if you’re thinking of sneaking someone back to your room it’s not really going to work. On my third night I stayed in the new part of the hostel, which felt much more like a hotel than a hostel. The room was spacious, the shower was excellent, Netflix was set up on the telly and the whole thing was rather luxurious, again more like a Zagreb hotel than hostel!

I have to admit that Swanky Mint Hostel was the perfect hostel for a non-hostel traveller like me. Although it’s perfectly set up for socialising with other guests and making new friends, theres no pressure to do so if you’re more of a private person. Billy and I happily sat in the bar with a cocktail before getting an early night and didn’t get dragged into any drinking games.

In summary, if I had to say one thing that sets Swanky Mint Hostel apart it would have to be the friendly and enthusiastic staff. They really make this hostel feel like home from the second you arrive, and they want you to enjoy your time in Zagreb as much as you do!

If you’re planning on visiting Zagreb and have any questions about staying at Swanky Mint Hostel, please feel free to get in touch on here or social media. And if you’re considering Zagreb as part of a multi-city break, I hope that the below posts will give you some inspiration!